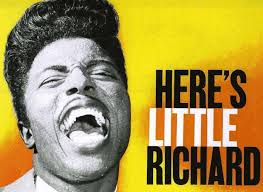 Little Richard died hours before The Stew hit the air last week… I felt bad that I couldn’t salute him.

All of my best memories of Richard were in-person memories.

I’ll never forget the first and last times I saw him.

They played the opening riff to Lucille for what felt like 3-5 minutes.  Then and only then did  Richard walk out and lay his hands on the piano..the room just exploded.

He glared at the band members who weren’t keeping up…

“I’m the Georgia Peach, The prettiest man in the room and the bronze Liberace…The KING of Rock and Roll.”

The last time I saw him was at the opening of The Rock and Roll Hall of Fame in Cleveland.

I was happy for him..getting in on the first ballot…, the original Hall of Famers.

I’ll be playing a handful of Little Richard classics.

His place in rock is set forever.

Elvis was sexy, Fats was accepted by teens parents,  Jerry Lee was just flat-out wild baby, Chuck Berry was like a night train, James Brown made you move.  Richard was just dangerous. Adults saw him as a threat to friends and family.

Surprisingly, Bob Dylan and Richard admired and liked each other. Even though they walked very different roads, they saw something of themselves in each other.

In high school, Robert Zimmerman said, upon graduation, he wanted to be in Little Richard’s band.

Dylan is about to release Rough and Rowdy Ways,  a new album of original songs.  (June 19)

I hope to fit in 2 or the three advance singles…False Prophet and  Murder Most Foul.

TWO new sponsors for The Stew.. (while our restaurant friends are on the sidelines)

Get you some NEW