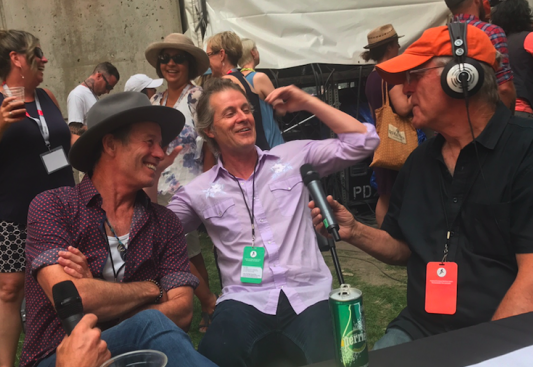 It’s National “have you seen my keys” Day Barney Bentall, who has a son Dustin and daughter Jess in the music business. Both are working on expanding careers. Jim Cuddy has two sons Devin and Sam well on their way to careers in our music business.

Jim and Barn are pals and we trade stories of trying to help your kids without being seen as helping.

The possibility of songwriting with your family. (Tricky)

And how families react to being the subject of songs.

The complete conversation can be heard by subscribing to MulliganStew Podcast (Spotify. Google play. Apple podcasts)

Or go to my podcast for the Zoom video and Audio:

We also have a last 30-minute jazz feature to celebrate the online events this weekend of the Edmonton Jazz Festival.

Andrew Glover and play you some tracks.

I have the true pleasure of playing an epic song – Murder Most Foul. Its 16:57 of heartfelt history based on the Kennedy Assassination.

It appears Bob has given the World another musical turning point.

Got some Little Feat Live..Santana…Kinks..kd lang, and Black Pumas

Oh..next week our guest is Corb Lund and his just-released album Agricultural Tragic

And in two weeks Eric Burton, songwriter and lead singer of Black Pumas.