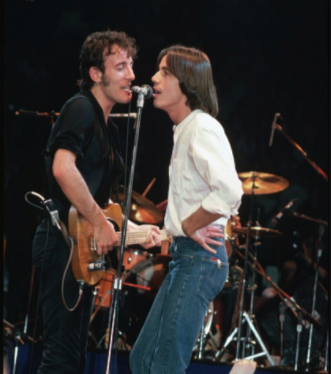 Are we really halfway through July??

I could use some tunes to smooth out the bumps on this road I’m on.

His opening act was smuggled into the country through  Canada. Wait until you hear who opened for Bruce.  It was their first gig ever in the USA. We’ll play some original audio from the night and then two songs you know them for.

While we’re thumbing through  the music calendar July 18, 1980 – at Cinema 1 in NYC – the first screening of No Nukes took place. We’re going to play the encore with the artists who made it all happen Bruce Springsteen and Jackson Browne.

Neil Young at The Last Waltz

Tom Petty and the Heartbreakers Live

Turn it up and enjoy!!

Let the music smooth your road.

Guitarist for Blue Rodeo and The Jim Cuddy Band..and a collector of rare guitars.

He runs 7 of them by the Zoom cameras and gives you a little history of each.

If you’re a guitar geek – this is for you.

NEXT WEEK – We revisit special moments of past Calgary Folk Festivals.