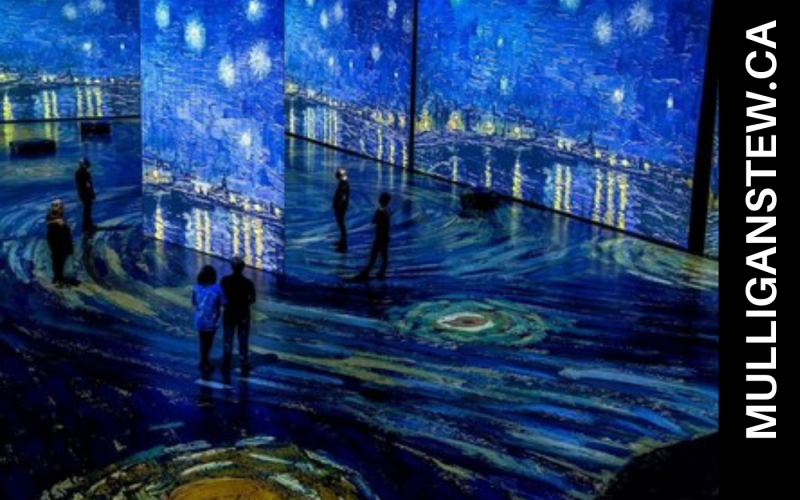 Our guest this week is Annebelle Mauger. Manager of Imagine Van Gogh. The immersive ground-breaking installation that’s gaining profile all over the World.

*Vancouver Van Gogh will now be open until the end of August.

In 2000, Annabell Mauger discovered Cathédrale d’images in Baux-de-Provence thanks to her partner, Timothée Polad. Founded by his grandparents Albert and Anne Plécy, this historic site was home to the first audiovisual creation in “Image Totale”. As it gained recognition worldwide, Cathédrale d’images presented new immersive exhibitions every year.

Imagine Van Gogh, designed by Annabelle Mauger and Julien Baron (longtime collaborators on projects at Cathédrale d’images), is a direct continuation of Albert Plécy’s concept of the “Image Totale”. From the very first outline of Imagine Van Gogh right up to its full realization, complete respect for the painted work is present in all of Annabelle Mauger and Julien Baron’s work. Though time passes and technology evolves, these advancements ensure above all else the preservation of still works of art.

Imagine Van Gogh highlights the works of Vincent Van Gogh from his Arles period (1888-1889) to the end of his life in 1890. These were exceptional years for the master, showcasing his talent, as well as his torments, in iconic works such as Sunflowers, Irises, Wheatfield with Crows, The Starry Night, in addition to his Japanese influences with the magnificent Almond Blossoms or his later The Church at Auvers. It also incorporates the many portraits painted during this period, including his Self-Portraits, Portrait of Dr. Gachet, La Mousmé, Portrait of the Postman Joseph Roulin, and L’Arlésienne: Madame Ginoux. Altogether, an incredible number of Van Gogh’s masterpieces will be revealed to visitors from a completely new perspective. Vincent writing to his brother Theo as he painted …

Selected works: The Garden of St. Paul Hospital, The Red Vineyard, The Road Menders, Les Alyscamps, Fishing Boats on the Beach at Saintes-Maries (1889).

For many days I’ve been absolutely distraught, as in Arles, just as much if not worse, and it’s to be presumed that these crises will recur in the future, it is abominable.»

Selected works: The Town Hall at Auvers, Portrait of Doctor Gachet, The House of Pere Pilon, Daubigny’s Garden. The Church at Auvers, Landscape of Auvers in the Rain, Wheatfield with Crows (May 20 to July 29, 1890).

Auvers is really beautiful – among other things many old thatched roofs, which are becoming rare. I’d hope, then, that in doing a few canvases of that really seriously, there would be a chance of recouping some of the costs of my stay – for really, it’s gravely beautiful, it’s the heart of the countryside, distinctive and picturesque.

They’re immense stretches of wheatfields under turbulent skies, and I made a point of trying to express sadness, extreme loneliness. You’ll see this soon, I hope – for I hope to bring them to you in Paris as soon as possible since I’d almost believe that these canvases will tell you what I can’t say in words, what I consider healthy and fortifying about the countryside.